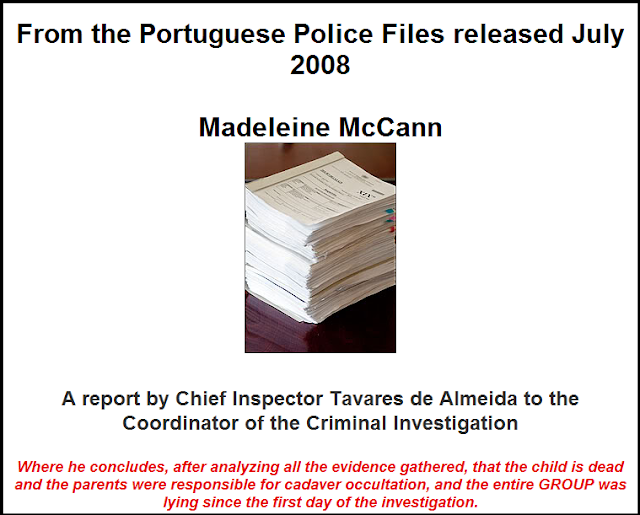 "For the attention of the 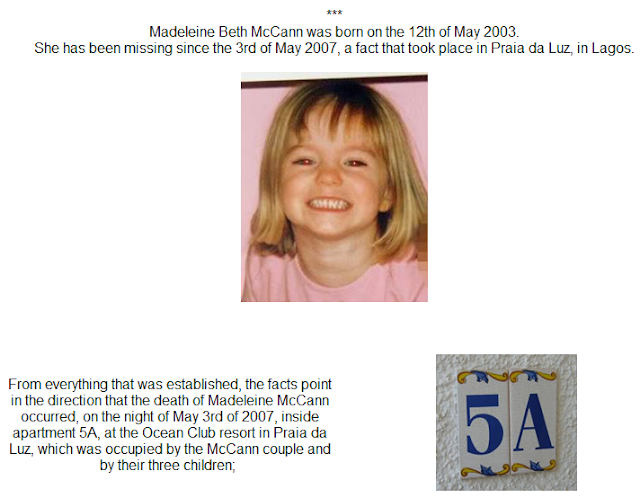 ﻿
﻿The child’s parents immediately attributed the fact (disappearance) to the action of a third party, defending the ABDUCTION.


The group’s members held a meeting during which they agreed on certain rules that sustained a version of continuous checking of the children, while they dined


There is a coincidence between the marking of cadaver odour and blood, according to the (partial) Laboratory Report that has been annexed to the process files.


Said marking occurred behind the living room sofa (cadaver odour / blood / DNA), which indubitably proves that said piece of furniture was pushed back by someone, after the death of Madeleine McCann was verified. Because of the few traces that were recovered on location and subject to examination, it has to be admitted as a strong hypothesis that it was subject to a “washing”, at a moment following the occurrence of death.


In the same manner, the soft toy that was used by the dead child, which was found at the top of the bed where she usually slept (cf. photos from the initial inspection) reveals that someone put it there at a moment posterior to death, given the fact that the bed doesn’t have any cadaver odour


This is to say, an intentional modification took place, in order to simulate a “picture” that doesn’t match reality, in an attempt to take advantage for the simulation of an abduction scenario;


It must be added that the cadaver odour detection dog strongly signalled the bedroom where the McCann couple slept, which may indicate the moving of the corpse from the actual death spot (living room) into a non visible part of said bedroom;


Furthermore a strong marking of cadaver odour was made on Kate McCann’s clothes, which may indicate that she was in touch with the cadaver;

There was also a strong marking of cadaver odour in the car that was used by the McCann couple (since the 27th of May 2007), which in conjugation with the blood dog’s marking and based on the forensics that are included in the process files, which indicate the presence of Madeleine McCann’s DNA in the car boot, lead towards not excluding a strong hypothesis that this vehicle may have possibly been used move the cadaver, 24 days after the death;

The indication from the cadaver odour detection dog, as well as from the blood detection dog, on the key of the aforementioned vehicle, where the laboratory would confirm the existence of Gerald McCann’s DNA, cannot be dismissed. This last signalling was obtained by the dogs after the key was put far away from the vehicle, in a non visible location.

From everything that is exposed, the process files result in the following:

A) the minor Madeleine McCann died in apartment 5A at the Ocean Club resort in Praia da Luz, on the night of the 3rd of May 2007;

B) a simulation of an abduction took place;

C) in order to render the child’s death impossible before 22H00, a situation of checking of the McCann couple’s children while they slept was made up;

D) Kate McCann and Gerald McCann are involved in the concealment of the cadaver of their daughter, Madeleine McCann;

E) at this moment, there seem to be no strong indications that the child’s death was not the result of a tragic accident, yet;

F) from what has been established up to now, everything indicates that the McCann couple, in self-defence, doesn’t want to deliver the cadaver immediately and voluntarily, and there is a strong possibility that it was moved from the initial place of deposition.

This situation may raise questions concerning the circumstances in which the death of the child took place.

Excellent work by HiDeHo, please see her site for the full illustration of this Report:
http://forum2.aimoo.com/MadeleineMcCann/Images-for-Twitter/Tavares-Report-1-928442.html 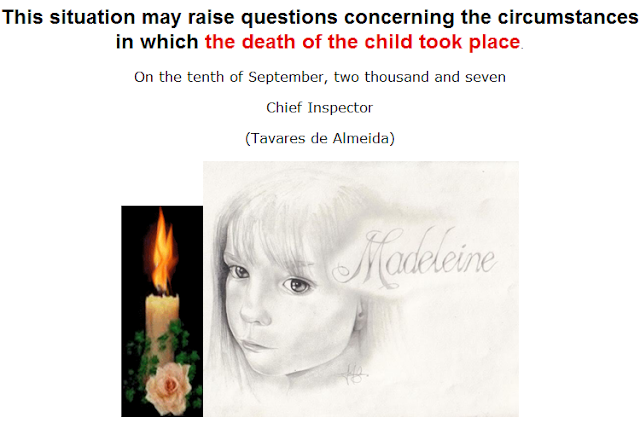 2013 Economic Recession:Do you agree with the Metropolitan Police (NSY, England) being attributed an EXTRA £6,228 per DAY towards investigating the McCann case?Their staff is already paid monthly; there are no reports to show the public what is being done.

megafundline
My name is not megafundline. But I care for Children and would find it logical to see that a case for a Child would still be open, not archived. As many others, I want the truth to be exposed, and justice to be done. So "about me" there is nothing else here, because this blog is not about me.